We recently got invited to a friend’s birthday at a bar and I rarely ever go drinking. I could probably count on one hand the few times I have ever gone to a bar. Since I really did not know the etiquette for these kinds of things, I just did what I felt was best.  I really wanted to spend time on something for her since I was not sure how long I could handle being in a bar so I had the idea to do a small embroidery.

We went on a neighborhood walk around to my favorite consignment stores and I was able to find a small plastic locket type frame from the 80’s with a glass front on it. It was perfect cause it would be small enough to fit into a purse, but big enough for me to stitch a little something for it.

The morning of, I dove into Pinterest for a nice border pattern, which you can find on my Textile Arts board on pinterest. Also, I found a lovely font on a free font website. I tried practicing my calligraphy on paper before hand to trace it on the fabric but finding a nice font to was a little easier since many cursive “T”s look like “J”s. To transfer the images to fit the frame, I was going to print them out, but I did not want to fiddle with resizing the circular printed image so I simply held up my fabric to my  screen and traced as best as I could.

The fabric I used was this organic cotton muslin I purchased from Organic Cotton Plus early on in my sewing days that I never got around to using until now. As soon as I find the average measurements of a tea towel, I will use the rest of the fabric to make tea towels.

The colored thread I used was not cross stitching/hand embroidery thread , but machine embroidery thread if that makes a difference. D picked up a nice box of a variety of colors off a Craigslist post I sent to him. My sewing machine D got for me from Costco last year for Christmas has a lot over 180 embroidery functions so the box will prove to be useful in the future once I take the time to program it correctly. Looked up some beginner hand stitches and got to work on the project. It did take me a few hours to whip up the finished project, but luckily H. took a nice long nap with D in the late morning. I put on a Yogananda doc from Netflix to pass the time and it was very interesting. His Autobiography is now on my To-Read list. 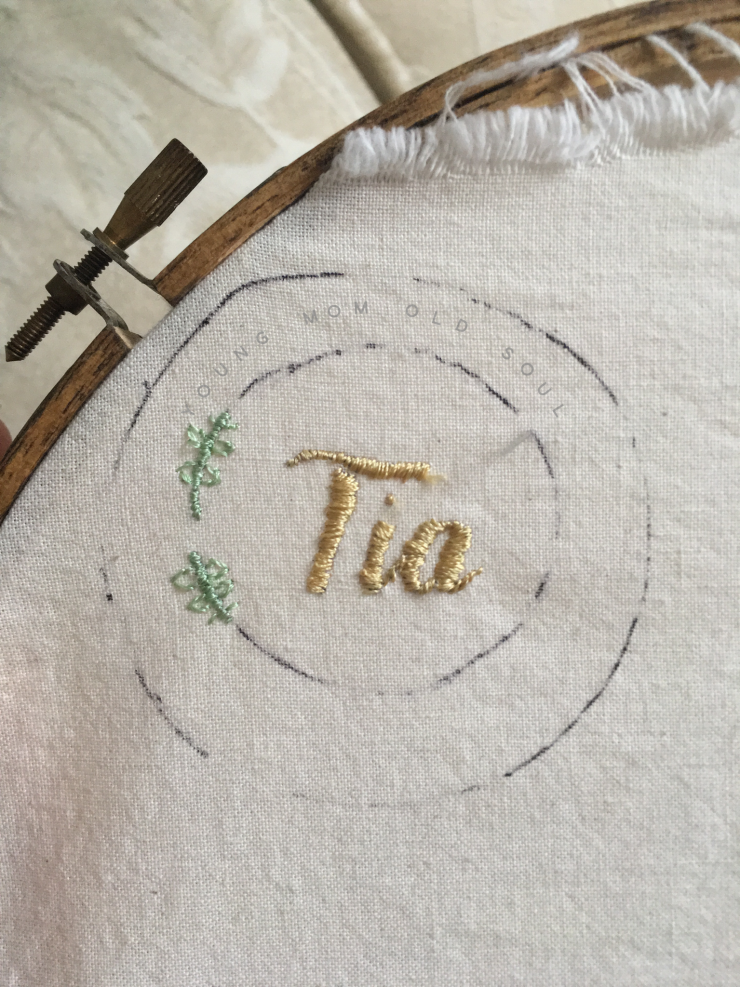 In the end, home girl appreciated the gift and I had a great time. D. played pool with the birthday girl’s boyfriend and had a couple of beers. I had two Dirty Shirley’s and a Midori Sour, all of which were super tasty. Normally I just drink cranberry vodkas or Midori Sours but I wanted to try the grown up version of a childhood favorite.

Back in the day after I had turned 21 I went to a family 50th anniversary party and asked one of my Auntie’s what she normally gets to drink. She said cranberry vodkas and Midori Sours and I liked how simple and sweet they could be. At the bar it was interesting asking others what they were drinking and how they knew the birthday girl.

In the future I will definitely try harder to make the stitches more even, but I guess that just comes with practice. This is definitely something I want to get better at since I think it is a cute, low-cost, personalized gift. It does take a couple hours to make, but H. is pretty great about taking his naps and independent play so I could definitely do more of these in the future.

If you are interested in learning how to embroider with me, or have me make something for you, please feel free to contact me and we can come up with something super cute. Have a great weekend everybody!